On 24 December 2020, the European Commission and the UK Government announced that a trade agreement had been reached. You can read the agreement here, which includes a summary explainer.

The European Commission held a press conference on 24 December hosted by Commission President Ursula von der Leyen and Chief Negotiator Michel Barnier, you can read the press release here. At the conference:

The Prime Minister Boris Johnson held a UK press conference on 24 December after the European Commission’s and you can read his statement here. At the conference:

The EU (Future Relationship) Bill has been approved by Parliament and received Royal Assent. Further details about the bill are available here.

The Department for Health and Social Care has updated guidance on healthcare for visitors. The key message for EU nationals from 1 January 2021 is:

If you are visiting the UK from Norway, you will be entitled to medically necessary healthcare. You will need to show a valid Norwegian passport.

The Turing Scheme is announced and replaces Erasmus+

The Turing scheme was announced last week. The £100 million scheme that’s replacing the UK’s participation in Erasmus+ will provide funding for around 35,000 students in universities, colleges and schools to go on placements and exchanges overseas, starting from September 2021.

The ‘Travel to the EU’ section of the Foreign travel insurance page has been updated to reflect that UK-issued European Health Insurance Cards (EHIC) will still be accepted in EU countries, with different guidance for people travelling to Norway, Iceland, Liechtenstein and Switzerland from 1 January 2021.

The UK Government has today published its new Border Operating Model. It is a guide on how the border with the European Union will work after the transition period. In Annex G the passenger process is covered which includes crossing the border. It details that EU, EEA and Swiss national identity cards will be phased out as a valid travel document for entry to the UK. From 1 October 2021, EU, EEA and Swiss nationals will require a passport to travel to the UK. Exemptions apply for those who are eligible for the European Union Settlement Scheme status.

The visiting the UK guidance has been updated to reflect this information.

A Seven Point Checklist for businesses associated arts, heritage and culture – which includes tourism has been published, these are:
Step 1:  Check your employees can still meet professional requirements for the country they’re working in, including whether they need a visa or work permit or need to apply to the EU Settlement Scheme.
Step 2:  Check if you need to change the way you receive personal data from the EU/EEA.
Step 3:  Check what you need to do to visit Europe after the transition period.
Step 4:  Check the impact on any arts, cultural or heritage services you provide to organisations or individuals based in the EU, Iceland, Liechtenstein, Norway or Switzerland, including for e-commerce and eu domain names.
Step 5:  Prepare for moving goods in and out of the UK, including works of art and historical objects.
Step 6:  Check the UK’s continued participation in EU programmes funded by the current EU Multi-annual Financial Framework.
Step 7:  Prepare for the new points-based immigration system will introduce job, salary and language requirements.

The way you hire staff from the EU is changing

The Home Office has launched a new campaign to help employers prepare for the introduction of the UK’s new points-based immigration system.

Free movement is ending, and the new system will introduce job, salary and language requirements that will change the way you hire from the EU.

From 1 January 2021, you will need to be a licensed sponsor to hire eligible people from outside the UK. Becoming a sponsor normally takes eight weeks and fees apply.

As a licensed sponsor, you will be able to recruit skilled workers from anywhere in the world, provided they meet certain eligibility requirements.

You can find further information, including full details of the sponsorship process on GOV.UK

Resources to help your business 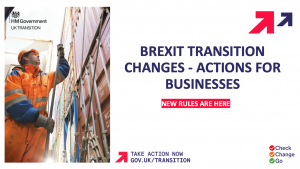 Gov.uk updates on the transition period

Business Travel to the EU Guidance

Employing staff from the EU

Prepare as an EU business

DIT advice for trading outside of the EU

Data Protection at the end of transition 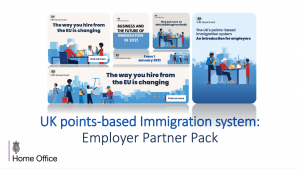 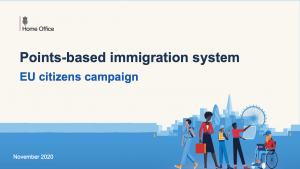 This information has been updated as of 11 April 2021 and whilst every effort is made to verify the accuracy of information, it should be used as guidance only. If you are a BETA Member and have questions or concerns please get in touch