Hostelworld unveils its ‘Evolution of the Hostel Traveller’ Report 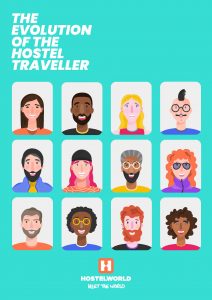 Hostelworld, the world’s leading hostel-focussed online booking platform, unveils its ‘Evolution of the Hostel Traveller’ report showcasing how the budget-conscious, international travellers (also known as backpackers) and their journey has changed from generation to generation and how it will continue to evolve in the future.

The global report, which surveyed over 5,000 people from different generations across the USA, UK, Australia, France, Germany, India and Brazil, reveals Gen Z’ers (individuals between 16-21 years old) are looking to explore beyond the traditional routes with a 33% decline in trips planned to ‘tried and tested’ destinations when compared to Gen Y (ages 18-39) or past travellers (ages 40+).

Latin America proved to be the most desired extended trip destination for Millennial and Gen Z travellers. Whilst Europe captured the hearts of past jetsetters, Central America has created a newfound appetite for adventure, with a 61% increase in travellers heading there today. For Gen Z, South America is top of their list, as one in five (20%) surveyed intend to visit South America in the next three years.

According to the report, the countries with the highest growth in desire to visit for Gen Z travellers (by % growth in comparison to Millennial travellers) are:

Asia continues to reign supreme for Millennial travellers, with Eastern Asian countries taking the two top spots for the most growth as a travel destination for this generation of travellers. The top three countries increasing in popularity for Millennials (by % growth) are:

The secret is out… female wanderlusters are seeing and experiencing more of the world. The new report reveals three-quarters (75%) of women across the world have gone on or are planning solo travel trips, compared to only two-thirds (67%) of men. Hostelworld’s own booking data reflects this trend with bookings made by solo female travellers increasing by 88% over the past four years.

In the United States, the disparity between women and men is the most apparent. In fact, 45% more women are going on extended hostel trips than men today (53% of women have recently travelled, compared to just 37% of men). Not only that, but it seems American women are leading the charge globally as the nationality making the most solo travel bookings with 20% made by American women, followed by Germany (11%), UK (10%), Australia (8%) and Canada (7%).

You can read more about why women solo travel here.

Where they are staying once they get there

The report findings reveal that over four in five (81%) recent travellers who went on extended trips of three weeks or more, visiting multiple destinations, chose to stay in hostels above hotels.

In the past, hostels held the reputation of being an easy and cheap solution for those traveling on a tight budget. However, a lot has changed since then, and don’t Gen Z know it! The future travellers want to meet new people from all over the world, with almost a fifth (19%) ranking social space as the most important consideration when choosing where to stay – an area where hostels excel. Another strong appeal factor that’s seen a steady increase throughout the generations is the free activities hostels offer their guests. From free beach yoga to local cooking classes, the importance of free social experiences in hostels has increased by 19% for today’s backpackers, as almost one in five (19%) say they’re attracted to hostels offering these, over those that don’t.

In addition to social space and free activities, travellers want unique accommodation, not just your standard hotel décor but something a bit different. In fact, hostel décor is becoming an increasingly important factor to where millennial travellers choose to book (44% increase).

The changing demographic of hostel travellers

Another notable shift highlighted in the report is the switch from the majority of hostel-goers traveling during a Gap Year, to fitting in their adventures in planned breaks from work or university.

According to the study, there is a global increase of 57% amongst Gen Z travellers planning shorter trips during their university breaks, rather than taking a full year off. With these new ‘off the beaten track’ destinations on Gen Z’s travel list, it’s not surprising that a young professional’s budget may be required.

“Our Evolution of the Hostel Traveller report shows how much hostelling has changed in the 20 years that we’ve been operating as the world’s leading hostel-focused online booking platform.” Said Gary Morrison, CEO, at Hostelworld. “This is only the beginning of what’s to come. Today we’re seeing a booming hostel industry, as global demand to explore the world and connect with new cultures continues to rise. Travellers are evolving, and so are the hostels where they’re staying, which is why I am excited to see what the next 20 years will bring.”

Find the full ‘Evolution of the Hostel Traveler’ report here.

Find out more about Hostelworld Here