1605. The fuse of rebellion is lit. The peace of the nation balances on a knife edge. Who will you trust? 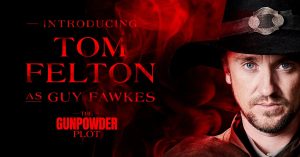 The Gunpowder Plot is delighted to announce that the starring role of Guy Fawkes will be played by actor Tom Felton who first found fame playing Draco Malfoy in the Harry Potter film series. Since then, Tom has starred in numerous film and TV productions including ‘Rise of the Planet of the Apes’, Neil LaBute mini-series ‘Full Circle’, and Ridley Scott’s ‘Labyrinth’. Tom can most recently be seen starring in Netflix’s war epic ‘The Forgotten Battle’ and in the Sky Original film ‘Save the Cinema’. Tom will next be seen on screen in the upcoming thriller ‘BURIAL’ and he makes his West End debut in ‘2:22: A Ghost Story’ this Spring.

Now he is set to play the starring role in The Gunpowder Plot, which mixes both live actors and digital stars in a multi-sensory theatrical adventure. Tom will work with leading Virtual Reality experts Figment Productions, whose magic will allow Tom’s image and movements to be motion captured and rendered “live” in the virtual world. Here audiences will interact with Guy Fawkes inside Virtual Reality, as they infiltrate the plotter’s company and learn of the conspiracy against the Houses of Parliament.

Speaking about the role, Tom said

I’m very excited to be playing a character so famous (and infamous!) for being at the centre of the most famous conspiracy plot in UK history. Guy Fawkes is a fascinating character with a complex history and with passionate advocates and detractors then and now. To be able to bring the character to life through Virtual Reality, and to allow him to interact with audiences in a way that has never been done before, is thrilling.

‘THE GUNPOWDER PLOT’ is a seamless integration of immersive theatre and virtual reality where live actors, the latest in digital technology and a cavalcade of multi-sensory special effects combine to allow audiences to step back in time to 1605. Here audiences don’t just witness the action, they play an ever-active role in one of the greatest stories in British history. The guests’ mission: go undercover, infiltrate the plotters and become part of history’s most daring conspiracy.

The experience has been created in collaboration with Historic Royal Palaces, the independent charity which cares for the Tower of London. Audiences will find themselves in a purpose-designed immersive theatre space in Tower Vaults, a location that was last accessible to the public two decades ago. Tower Vaults are situated alongside the UNESCO World Heritage Tower of London, where much of the prelude to the real Gunpowder Plot took place over 400 years ago.

Layered Reality is fast establishing itself as one of the foremost providers of immersive experiences in the capital – recent project, ‘The War of The Worlds: The Immersive Experience’ won the prestigious THEA Award (the “Oscars” of themed entertainment) and is in TripAdvisor’s Top 10% of attractions globally.

The Gunpowder Plot brings together an incredible team. Creative Director Hannah Price is the founder of Theatre Uncut, and co-Artistic Director of King’s Head Theatre alongside Mark Ravenhill and is one of the UK gaming industry’s most acclaimed Performance Directors. Her work on Control (Remedy Games) helped the title achieve 11 Bafta nominations and multiple Game of the Year Awards.

BAFTA-nominated writer Danny Robins (The Battersea Poltergeist) recently won a WhatsOnStage award (voted for by audiences) and has also just been nominated for an Olivier award – both for ‘2.22: A Ghost Story’,starring Lily Allen. Hannah and Danny developed the story, alongside Associate Director Rosie Jones(Nintendo, Remedy Games, Audible, Rose Theatre Kingston, RSC), and working closely with Historic Palaces Curator Dr Alden Gregory to draw on historic research to inform everything from characters to sights and smells in the experience. Virtual Reality elements of the experience are provided by leaders in personalising the VR experience Figment Productions (winner of The international VR Award for ‘Current, Rising’ at the Royal Opera House – Best Out-Of-Home VR Experience of the Year 2021) headed by Simon Reveley.

Curator Alden Gregory (curator of Historic Buildings at Historic Royal Palaces) and producer Tim Powell (Historic Royal Palaces creative consultant) bring their vast historical knowledge to the production and the historicallyaccurate depiction of the city as a backdrop for the action is overseen by Gregory. Everything has been meticulously researched by Gregory to ensure that the experience is inspired by the sights, sounds and even swear words of Jacobean life, to create a sense of authenticity and understanding of what the past really looked like.

“We want it to feel like somebody made a movie version of the Gunpowder Plot and it came to life around you and exploded in your face with bits of Jacobean London flying at you”. Says writer Danny Robins “This is a story about activism. It’s about trying to change the world but then realising that you’re doing it the wrong way.”

“We cannot wait to share this groundbreaking production with an audience. Incredibly realistic sets you can step onto and run your hands across. Cutting edge VR that puts our audience in the heart of London in one of its most volatile moments. Layered levels of immersion so everything you see, feel, touch, and even smell takes you further into the story. Add live actors and a brilliant script and our audience will have an experience like no other.”

“We will transport you back to 1605, all of your senses will tell you that you’re actually there. Your eyes will see London as it was in 1605, you get the smells, you will see the Tower of London as it looked then, and you’ll go down the Thames as it was at that time. That’s what makes it magical.”

“We want to give people the sense that they might have literally time travelled through this show, feeling the same experiences of joy, confusion, and fear that the conspirators felt. We’re pushing things to a whole new level, doing something with immersive theatre that hasn’t been tried by museums in this way; simultaneously creating an experience rooted in history and a show-stopping night of entertainment designed to reach a wider audience than might be drawn to more traditional heritage attractions. And ultimately my role is making sure that what we do really evoke that moment in time to transport participants back to seventeenth century London.” Alden Gregory, Historic Royal Palaces.

“The show is set up in such a way that it fools the body into telling the mind that you are physically there, that those characters are speaking to you directly and this encourages the belief that you are both present and able to influence the history that’s happening around you. It’s a fundamentally new way of experiencing history because you’re not just witnessing it but actually participating in it for the first time. The multisensory elements will form memories that will really feel real.” Tim Powell, Historic Royal Palaces creative consultant.