The Play that Goes Wrong

The Play that Goes Wrong

Do not miss the multi award-winning international smash hit show The Play That Goes Wrong, the longest running comedy in the West End

This hilarious production features an extraordinary range of theatrical techniques that are sure to energise your group’s studies. Showcasing the fundamentals of comedy, the truly original premise promises to inspire performers and playwrights of the future. 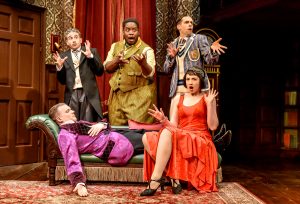 The Cornley Drama Society are putting on a 1920s murder mystery, but as the title suggests, everything that can go wrong… does! As the accident prone thesps battle on against all the odds to reach their final curtain call, hilarious results ensue!

Hailed “a gut-busting hit” by the New York Times, Mischief’s The Play That Goes Wrong, now in its eighth year in the West End, has won a host of celebrity endorsements from the likes of Joanna Lumley “We laughed until the tears ran down our faces, it has to be seen” to Ant & Dec “The funniest show we’ve seen! If you can get a ticket, go!”

‘I FEARED I WAS GOING TO HYPERVENTILATE’

BOY, DOES IT HIT THE FUNNY BONE’

‘A TRIUMPH OF SPLIT-SECOND TIMING’