Up at The O2 celebrates its ten-year anniversary

Up at The O2 celebrates its ten-year anniversary

To commemorate this amazing milestone, Alistair Wood, Vice President of Real Estate and Development for AEG Europe shares his thoughts on the early thinking behind the attraction and then some of the challenges and successes over the past decade 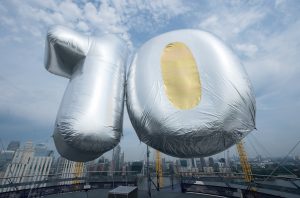 The idea for Up at The O2 was a combination of a couple of fairly random threads of thought – as a destination, The O2 was beginning to do well, but we were met with the challenge of trying to get people to the ‘back’ of the venue; the line of Up at The O2 was literally the straightest way to do that, albeit a convoluted one! The other driver behind the idea was finding a way to open up access to the magnificent expanse of The O2’s roof. As anyone who has been to The O2 will know, once you have entered the front doors, it is a relatively insular experience; one we are gradually trying to open up to its environs and the Thames on its doorstep.

Having been up on the roof during the construction phase, we knew what an amazing vista you got from the top but also how the views changed dramatically as you went from one side to the other. Combining these, I suggested to our ownership at the time that we try developing the roof walk concept. As a company, AEG have explored some pretty quirky things over its time and I was duly given the seed funding I needed to open up a feasibility on it, albeit as a California-based company, our ownership was deeply cynical of why anyone would choose to walk over a roof given our weather!

Long story short, the attraction opened in time for the London 2012 Olympics, and it’s gone from strength-to-strength as an attraction ever since.

For those exploring and operating comparable experiences, I wanted to share my top 10 learnings – the good, the bad and the ugly…

As with any emerging concept, our main challenge was understanding and developing the business case. We commissioned a study by a company called Locum Destination Research, which gave us great insight from a third-party with direct experience and exposure to other comparable attractions. I then developed a detailed Business Plan off the back of their recommendations that was then used to inform all recommendations to ownership. Detailed understanding of the Business Plan then ensures every single aspect of the operation is thought through… How does pricing compare to other attractions? What commissions do you have to pay to sell tickets? What’s the

headline price and impact of VAT / ticketing commissions and in turn, how does discounting impact revenue? How many staff are needed? What’s the size of the marketing budget – bearing in mind London is an eye-wateringly expensive and complex place to market to!? What are your occupancy projections and seasonality impact?

There are a myriad of considerations, which inevitably you don’t get all right, but a comprehensive understanding of all assumptions you are making is a fundamental pillar in building a successful project – and as a project leader, you have to clearly understand every component. As it happened, our overall projections were pretty accurate, but thankfully the business didn’t taper post stabilisation in year-three, which we had anticipated it would do.

As you would expect, there were major question marks internally around the Business Plan assumptions and deliverability, but the pending London 2012 Olympics meant we had to make a very swift decision post getting planning in March 2011. As our naming rights partner, O2, had committed a significant number, it did underwrite a good chunk of the Business Plan, but their offer was predicated on it being open for the Games. I have since wondered whether it would have ever got built if this nexus hadn’t arisen. Having achieved executive approval for it, we were able to finalise Building Contracts very quickly with contractor ISG, who, with key sub-contractor Base Structures, stepped up and delivered a very efficient build on time and budget. 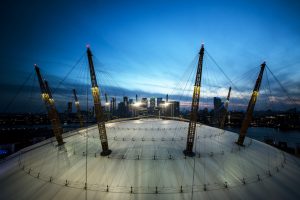 With the concept in mind, we felt we had to go back to the mastermind of the Millennium Dome, Mike Davies at Rogers Stirk and Harbour and Partners. Being the amazing character and architect that he is, he jumped in with both feet (despite having many far bigger fish to fry!) and as a climber himself, approached the project with great imagination and energy. As he was held in such great regard by all at the Council, his willingness for the building to evolve and adapt for this kind of use meant that planning was relatively straightforward.  His concepts included elements of great design, such as the base towers and the finishes on the roofwalk. This inevitably meant a higher budget; however, this additional investment has reaped rewards and as such a prominent structure next to our front door, I have no doubt that its aesthetic has induced many of the visitors to The O2 to return and book.

I love the thrill of projects like this. That said, much like the O2 arena when we were building that out, there were many who questioned whether it would work, citing issues such as challenges with the weather, an overly ambitious Business Plan, too many staff needed to make it work etc. As we moved towards the transition into operations, these questions increased, including at one point, a suggestion that we couldn’t open it if it was raining – given it rains in London, on average 111 days of the year, that one would have hurt! Whilst all was resolved in the end, it did lead to a few sleepless nights – easy to say in hindsight, but you have to try and enjoy and thrive on the pressure – hold your nerve and stay true to the original concept.

With any AEG project, and this is no exception, we always say that it cannot be delivered without full stakeholder support; there is no way the Dome or The O2 could have been delivered if everyone from the government down did not support it. With Up at The O2, everyone involved, including the GLA and Trinity as landlord and The Royal Borough of Greenwich as decision maker, saw the wider benefits – tourism, jobs etc. and despite the perceived impact on a landmark building, fully supported our vision when it would have been far easier to just say no.

Our attraction operations team led by Dan Hurst have always done a great job, supported by Wire and Sky on the operational side. A core focus and appeal of the attraction was the “wind in your hair” nature of the experience. With an open walkway and a climb up to 55 metres, this inevitably raises questions around safety and risk. In having such a professional and well-trained team, we have taken health and safety out of the question – so everyone who does the walk feels at ease. This is reflected in the Tripadvisor ratings – we still sit at 12th on top attractions to visit in London- pretty impressive after just 10 years and considering the extent of world-class alternatives in London. 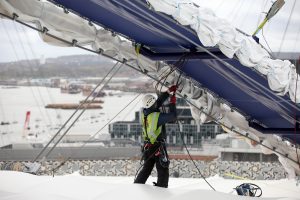 I mentioned the role O2 played in ensuring we got the project signed off and on site. But fair to say as a development team, a key part of our approach was very much to ensure the project did not go over budget. This budget – in error – did not really allow for a huge amount of spend on internal fit out and production. As with everything we have done with them, O2 were an amazing partner (led on this project by Nuala Donnelly) in this regard and having fixed the name of the attraction ‘Up at The O2,’ quickly moved to bring some brilliant design ideas and concepts to the table which we went on to run through the whole of the design. No question, this gave the project much more of an integrated feel and added immeasurably to the marketability and experience as a whole. Too many naming rights partnerships remain focused on eyeballs of the brand itself but when you can fully integrate the partner into the project, both sides see far more benefits.

After around five years of operations, our numbers had started to stall somewhat and we did wonder whether the attraction may have peaked. Led by our fantastic marketing team at The O2, the whole marketing approach was reimagined and repositioned. This gave the attraction a new lease of life and I believe, was instrumental in broadening its appeal to a wider range of users and ensuring visitor numbers continued to grow. Too often on projects, marketing gets stuck in a rut and doesn’t evolve – marketing must progress alongside the attraction.

Something else that works well for us is PR and activations. We have the perfect backdrop for striking imagery and have run all sorts of activations to drive coverage and awareness. From HIIT sessions with The Body Coach Joe Wicks, Christmas choirs, silent discos, stand up and yoga, to live weather reporting and a stint in EastEnders – all these opportunities help to keep us in the media and the experience fresh.

We’ve even had some of the artists who have performed in the arena, climb the roof including Thirty Seconds to Mars, Kevin Hart and Anne Marie to name a few.

Fair to say, a big success story in a similar sphere to our project was the Sydney Harbour bridge climb. Whilst I am not suggesting we are in the same league as that attraction, the nature and profile of it did influence a lot of our thinking: open air, steep climb, great panoramic views etc. As we focused on pricing and positioning of the attraction, Sydney was one of the comparables we looked at. If you went to book a ticket today, the headline price to climb the Sydney Harbour Bridge as an adult is £250. From the outset however, we wanted to ensure our attraction was affordable and accessible to all – at £25 a ticket in 2012, the attraction was very competitive versus other London attractions. It has grown to a lowest ticket price of £35 per ticket today, which for a 90-minute experience, still reflects great value for money, as the TripAdvisor reviews testify. Plus, we don’t stand still, we have introduced new products including Celebration Champagne climbs alongside our partner Champagne Lanson and also sunset climbs which is our most popular experience.

As Storm Eunice kindly reminded us recently when she ripped part of the canopy off, The O2 is a unique structure. Whilst this does create a number of challenges, it also presents a number of opportunities, not least the fact that The O2 has become an iconic building internationally. Being able to climb across it has become a major pillar of our advertising and appeal. We have constantly focused on this in all our positioning and marketing, allowing the attraction to continue to thrive 10 years post opening. As with any global city, you have to work very hard to attract visitors, but the unique appeal of Up at The O2 has ensured that despite the arrival of many potential competitors – The Shard, The Dare Skywalk, Arcelor Mittal Orbit – we have continued to hold and grow our market share, something we hope to be able to do long into the future.

Find out more about BETA Member Up at The O2 here